When it comes down to the letters I’m using, I have to admit that I’m going with my gut on a day-to-day basis. The letter for today was one that I thought I had settled. I had in mind ditches. I know, it’s not a glamorous word but having lived in areas that are rain-fed most of my life, I have been accustomed to the need to get water off a field and in a place where it can continue to feed the groundwater table.

Then, one of my friends who knows a lot about water-holding capacity since her husband is a rice farmer suggested debt be the word of the day. She stopped me in my tracks. I hadn’t thought of that one at all. And it is something that every farmer I know has to deal with whether they are small or large and no matter what production practices they employ.

Why do farms incur debt? 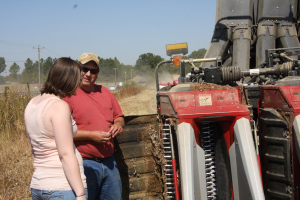 Most farmers operate like other small businesses by creating a business entity to track expenses, investments, taxes, etc. Investments can be taking on additional land, replacing equipment or buildings, etc no matter what kind of farm it is, there tends to be some amount of debt incurred. Like other businesses, incurring this debt takes detailed conversations with a banker and reviewing the debt to assets ratio to decide if the risk is a good one.

For instance, to harvest cotton, most cotton farmers purchase a cotton picker — the latest, greatest can be $600-700k. That’s an enormous investment, but what would be other options? I mean, its clear that Americans don’t want to go into cotton fields to harvest a crop. There are custom cotton picking services that start in South Texas or some other early harvest area and work their way north. That works well for some farms but that also has a risk in that the staging depends on additional factors out of the farmer’s control and weather can throw enough of a wrench into things. The EPA describes this saying:

It is often puzzling to non-farmers to see expensive equipment stored in sheds and/or sitting idle for months at a time. Why would a farmer invest $300,000 in a large combine only to use it for four weeks out of the year? How could a farmer possibly justify spending upwards of $200,000 for a tractor that is used for little else but tillage? The simple, but important, answer is TIMELINESS. Crops are biological “products” that produce optimum yields only when planting and harvest operations can be performed within relatively small windows of time. For instance, the optimum harvest window for corn in Eastern Illinois is only 30 days long and for wheat in Kansas the harvest window is only 10 to 14 days. This requires the use of large equipment that is used very intensively for relatively short periods of time.  via Economic Overview | Ag 101 | Agriculture | US EPA. 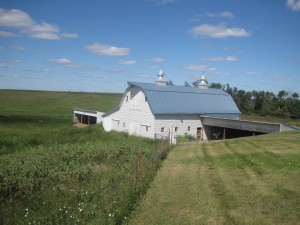 Land is another expense that tends to be big. This is especially a tough one for beginning farmers. As someone who bought a home in the last few years, this one seems intuitive for me. I mean, I couldn’t start out a home owner, so I rented places to live for a while. A lot of the farmers I know also lease land, many have a combination of purchased & leased. But how expensive is it to buy land? Depending on the crop mix, land per acre can range in costs dramatically but the USDA 2012 report Agricultural Land Values Highlights says the average values are:

Farmers also have to consider irrigation, barns, livestock and then all the annual expenses like seed, fuel, livestock feed, etc. My friend Val’s written a post about some of the typical expenses in her area and the way those take a bite out of the revenue the farm generates.

Something that stands out for me reading her post was how big the numbers can seem — you hear the price and yield of corn or soybeans, and multiply those on hundreds of acres. Those numbers get pretty big and it’s easy to get the impression that farmers may have a tendency to be wealthy. However, the vast majority of farmers I’ve met, once they have met all their costs (direct and indirect), they have numbers left that on good years like like good salaries and on bad years look like bad salaries. Sounds risky for someone like me who likes a regular paycheck!

Other Perspectives on Farm Debt

I decided to touch base with a couple of friends who farm and they all encouraged me to keep the A to Z going. They agreed debt is part of most farm operations and I asked if I could share a few of the things they told me.

Tomorrow (Friday) is the day for the letter “E” so what do you think the word of the day should be? (Thanks to Thomas & Kim for giving me ideas for every letter in the alphabet!) I’ll do F on Saturday and then take a break Sunday…. so please feel free to critique the project so far. 🙂