It wasn’t too long ago that I was talking with someone and they started describing something they saw and didn’t know the right words to use. They wanted me to understand, but it was sort of like they were speaking a different language. They were talking about a town I hadn’t been too but they knew it had something to do with farms so we both thought we would focus on it and figure it out.

The “it” was a really big building. It was right there on the river. You know the big building. It’s really white. I’d never been to that town and yet I had been to every town and seen “it.” The “it” being a grain elevator — the storage facility for corn, soybeans, wheat and rice.

My first chance to be in the world of grain elevators was while I was in college in Oklahoma. I got used to the elevator on the horizon. Enid, Oklahoma was the Wheat Capital of the US so the elevators there were hulking masses. And in the photo on the left, you can see grain bins in the foreground. 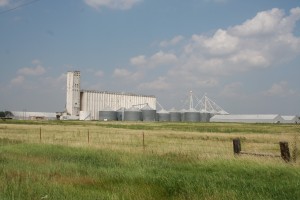 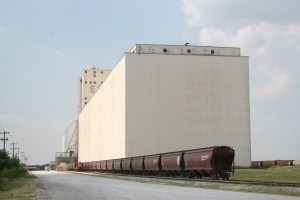 Now I live in a river city and as you can see, there are grain elevators nearby! When you go up in the city’s most recognizable landmark, the St. Louis Arch, you see elevators just across the river, and from the base, its clear how close they are! 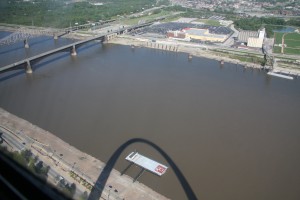 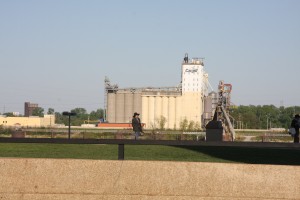 Tons of bulk grain move through elevators as farmers from throughout the area, bring their crops to elevators to be sold. Elevators are virtually always on a major river or a railroad line because transportation is so critical to getting the crop to market.

I don’t feel like I can stop my post on the letter E without acknowledging there were several other words to consider. The biggest one was the environment as farmers need to work within the environment, making choices that will insure our planet can produce food for generations to come, but there are so many areas of the environment involved in agriculture that I think I could do an entire A to Z on ag & the environment. I could do earthworms. Yesterday I did an economy related piece talking about debt. And there are all types of farm equipment my friend Al Winmill pointed out. And ewes are really cute and produce wool!

But elevators seemed a good fit for the series.

Tomorrow (Saturday) is the day for the letter “F” so what do you think the word of the day should be?

0 shares
« D is for Debt (Farm Debt) — an A to Z Series about Agriculture
F is for Farmer! — An A to Z Challenge in Agriculture »