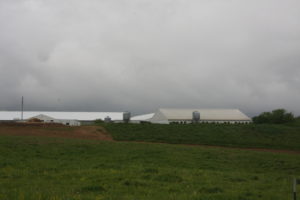 For Earth Day weekend, I had the amazing chance to visit my friend Chris Chinn and her family on their pig farm in northcentral Missouri. Chris & I got to know each other through social media. We had probably talked for a year before we met in person. And ever since we met, I’ve told her I wanted to come visit the farm. Schedules have been crazier than I would have liked so it always seemed it would be next month. By the time Chris, her husband Kevin and I shared the USS Missouri experience I knew I had to make it happen. We finally created a perfect opportunity and I went up there before we headed to the State of Now conference where the two of us took the stage together. I’ll be writing several posts about it, but why not start where most people go with they think of a pig farm… the smell.

Yeah, I know there are several things that people think of when they think of pig farms, but I have to think that the smell is the thing that most frequently comes to mind. Its a stereotype but since we all know stereotypes are frequently built on the truth, I assume that I’m not the only person who wondered about the smell. 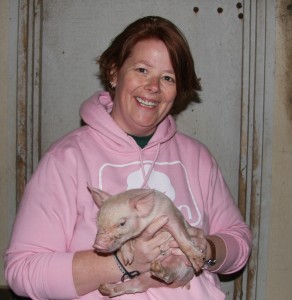 I got there right around dinner time, and since I missed the drive on the road, Chris came down to meet me. We drove up to the house and I saw the dogs kenneled so they didn’t get to the highway. We walked nearly straight out to the deck on the back of the house where Kevin was working the grill (pork steaks were on). And Conner was busy being all boy.

We were having a great time just catching up, and getting to know Conner and Rachelle when I realized the pig barns were just up the hill…. not at all what I expected as I hadn’t smelled a thing!

Later that night, Chris and I went with Conner as he got the chickens back in their coop. It was probably more than halfway up to the barns and no joke, I still didn’t smell them. They seemed pretty close too. I figured morning chores and my tour would be the rude awakening I had always heard of and that I prepared for by bringing a change of clothes.

We did all the feeding rounds for cattle, etc. and then Chris and I went to tour the hog barns. As we went in, I can’t lie, there was a smell that made it clear animals were here. I decided to keep my inhaler with me just in case it got to be a strong smell — that’s a lesson I’ve learned by having reactions to some things. We went on in (I’ll have to write a separate post on that process) and I soon was standing in a barn full of sows and piglets. I was amazed by how clean it was and how little it smelled. Sure, I know there must be times when the smell is much stronger, when they are cleaning barns, when they are spreading manure on the fields, etc. but wow. I was really impressed. 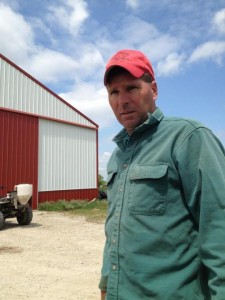 The last stop on my tour was the feed mill. We went on over to see how all that was done and headed back to the house to pick up Conner so we could grab a quick lunch so Chris & I could shower & head to Des Moines. As we realized the time, we decided showering first would likely lead to starvation of us or kids, so we picked up Conner and headed to town.

You can see what Kevin thought of this at right. Yes, that’s how he greeted us going to town. I promise, he’s usually a friendly guy! Chris explained as we went to town. But you see, for Kevin, you do not leave the farm for town after being in the barns. There is a smell and it gets in your clothes. In town, it could offend someone or give people the impression that farmers are dirty, etc. For me, I was just thinking I’ve been dirtier and stinkier in public having spent a sweaty day at the zoo, park or something. I didn’t see that in small towns, people would be aware of the connection to farms and that may lead to misperceptions about farmers.

With that in mind, we carefully picked a table away from everyone else, over in a corner at the restaurant. We all washed up, had a great lunch and got back on the road. Now as to what happened to those hog barn smelling clothes… I’ll leave that to another day too!