I don’t know if you watch Duck Dynasty on A&E, but I have to admit to enjoying the show immensely. Why do I love Duck Dynasty?

But I always thought of it as entertainment until this week when I realized I saw a little of myself in Willie Robertson. In case you don’t know who I’m talking about, here’s a screenshot of the biography page A&E has. 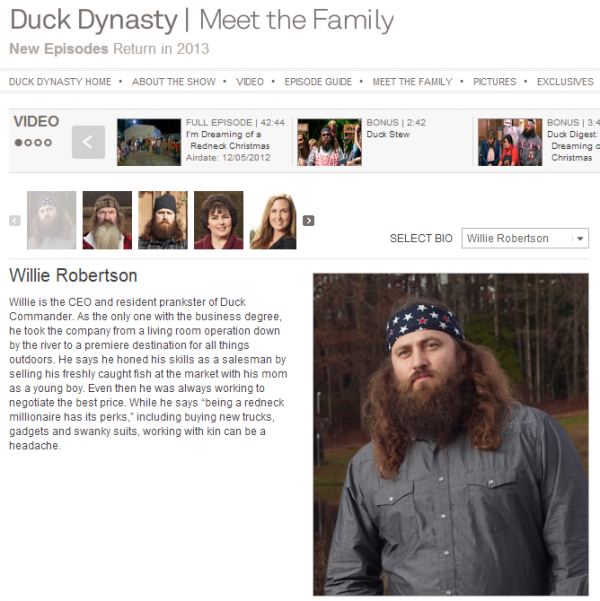 If you’ve watched an episode or two, you have to know what happens when Willie doesn’t want to do something. I wish they had all the full-length episodes on A&E, but you may have access through another service. In fact, as I write this, I am watching “A Redneck Christmas” (the true meaning of Christmas? faith, family and facial hair) on demand but you can also catch it online. But the episode that I most clearly remember his saying something that I think I’ve channeled was the episode where they were “Sweatin’ Bullets” and the guys from the warehouse build a redneck waterpark. Check your online services to see if you can get that episode. 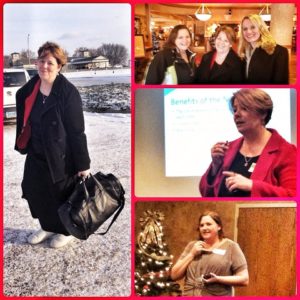 I’ve heard Willie dig in on things several times, but for some reason it is vivid when Willie digs his heels in and says he will not do something. Absolutely not going to happen. And then of course, something happens that he changes his mind and he goes along and enjoys himself with swing into the lake.

My channeling him wouldn’t nearly as easily fit into a 45 minute episode, but this summer when I made my first trip to North Dakota….. I protested the idea of coming back anytime soon saying I wouldn’t visit til winter had passed. Well, Sunday night as I flew into Bismarck with a temperature of -7 degrees Fahrenheit I guess that got busted all to hell. Mind you, it was far too cold for my Southern mind to process what was happening in such frigid temps, but once I thawed out good and was able to relax, I realized going with it was the right thing to do.

And I had a good time. Not only did I get to make a difference with work, but I got to see some friends and meet some other great folks…. I even had the chance to add another state capitol visit to my list. I posted several photos to Instagram of the trip if you’d like to check them out, here are the links:

By the way…. my favorite part of the show is usually when Jase just lays out something in his “confessional video” spots. CRACKS ME UP routinely.

What have you said you’d never do that turned out to be pretty good after all?

0 shares
« A Great Cheeseburger in Downtown Portland & A Bloody Mary Bar
What can be done about the obesity crisis? »