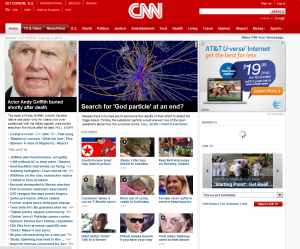 Yes, our friend, the person behind the AgProud blog and Facebook page, Twitter’s @AR_ranchhand, Ryan Goodman wrote a piece for CNN’s food blog “No Bull – what a cattle farmers wants customers to know”! I bet some folks had to wonder how it happened and are wondering if that sort of thing can happen again. (Editor’s Note:  The screen capture at left was shot Tuesday, July 3, 2012. It shows Ryan on CNN.com with his second article for eatocracy “No bull – start a conversation with a farmer.” I am so proud , yep, I’m #agproud!)

What Makes Ryan So Special

Ryan created this opportunity by being himself and being available on a regular basis. Opportunities don’t just happen out of the blue. So if you want to dissect the steps involved, here’s what I see makes Ryan so special:

All of those things that make Ryan special, also make him a social media hero but there are a few more things too I’ve seen in the past few years. He’s got a lot of irons in the social media fire and keeps each of them moving along steady and true. Here’s at least some of the places you can find Ryan: