This morning as I reached for a bowl for my oatmeal, my eyes lingered on an espresso cup and saucer that stays in my tiny kitchen cabinet despite the fact I don’t drink espresso. Many  times I have thought I probably could make better use of the cabinet space. You probably think it would take a really ornate piece of ceramics to get past that screen, but this is the cup and saucer. 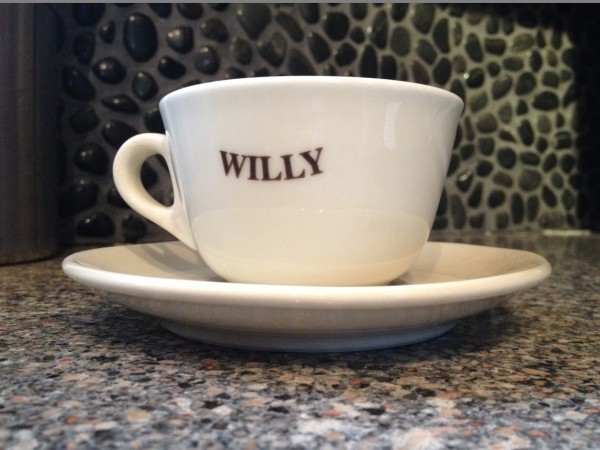 Yes, it is a pretty simply cream-colored cup with simple black writing on it. It simply says Willy. The reason it it in my cabinet is every time I look at it, there is a flood of memories that comes to me.

See Willy is the name of a specific restaurant and bar owner I met on one of my defining overseas trips. I have always wanted to travel and sometimes it seemed things just weren’t certain to work in my favor. I had a burst of a few trips as I began to have a bit more disposable income when I left New York. But it didn’t take long for the world to change. In the wake of September 11, a lot of people were deservedly afraid of traveling internationally.

The US State Department was a flurry of activity and they warned Americans of every possible threat. Countries that had long been safe for Americans to visit were circumspect. I always wanted to travel more and had only done a few trips overseas — my first big trip was to Russia, I then went to Japan a couple of times and went the The Netherlands & Belgium.

When I would talk to the travel agent for work, I would always be talking about wanting to do more travel. She had booked several trips for me personally. And in October of 2001, she asked me if I had taken a look at international airfares recently saying that ticket prices had fallen dramatically. I hadn’t but liked the idea despite a little nerves at the thought. She asked where I would go if I could go anywhere and I pointed to the fact I had a college friend near Bologna, Italy. Next thing I knew, I was planning a Thanksgiving trip to visit her! 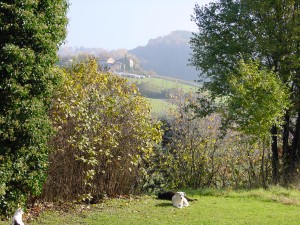 Since I was still pretty young and living on a tight budget, visiting a friend was probably the only way I could travel internationally. And my friends Kelly & Steve had lived in New Jersey while I was in White Plains. I had been to the hospital the day their oldest — Emma — was born. Sounded like I should at least ask. 🙂

So all of that was the background for my 2001 Thanksgiving trip to Italy. The politics in the world were incredibly divided…. the world I wanted to travel appeared to becoming polarized. I was cautioned to be careful showing my Americaness in public places. That sounded reasonable, and yet at the same time, I always had carried small US flag lapel pins with me to leave with tips when I got really great service. I decided to do that again and to be careful with where I left them just in case.

I didn’t have to be so careful. Sure, there were some rather heated debates as many people around the world weren’t sure the US was on the right course (and I rarely think Americans are perfect so I could handle debate. There were also lots of people like Willy who were willing to chat, ask questions and provide lots of reasons to smile. 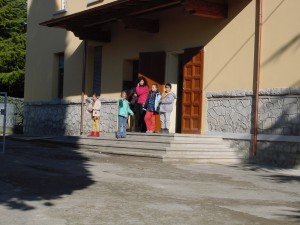 Willy ran a small restaurant / bar in Guiglia which is a small town in Emilia-Romagna, Italy. My friend Kelly and I stopped in there one day when we had come back to town after a busy day sightseeing. We were going to pick up Emma and George from school but had plenty of time for a coffee. That’s what got us to Willy’s! We had a great visit with Willy, the owner of the place. And I wished I had brought some really cool gift, but I only had the lapel pins….. and yet, to Willy that was a perfect gift! It was Willy’s American Bar and somehow he felt the espresso cups and saucers needed to come home with me.

I haven’t made it back to Willy’s over the years, but I think about it — and the way I was able to travel that fall — often. And that’s definitely worth some shelf space! Looks like he is still leaving quite an impression on people who visit Willy in Guiglia based on the TripAdvisor reviews!

Those cups and the memories they evoke sure occupy a lot more than space in my cabinet. They occupy an immense amount of space in my heart and head!

A Weekend’s Work at a Microbrewery — White Dog Beer in Guiglia, Italy
My Visit to Italy’s Must-See Event, the Palio di Siena<
V is for Viticulture — Cultivating Grapes for Wine Making
Remembering a Visit to Milan’s Duomo
Balsamic Vinegar From the Farm
He’s just a little Speck (a free-range one at that)<