I wasn’t sure I would want to tackle GMOs with a post, but another blogger who’s doing the A to Z Challenge (Sydney Katt of authorSydneyKatt.com) said she didn’t know much about agriculture and would appreciate knowing more. The comment reads:

So I’ll provide my thoughts on GMOs (and a reminder that I write content for this blog on my personal time & it has no connection to my job).

There are a lot of sites that will give you a lot of different definitions. But I think I’ll go with the USDA-Agricultural Research Service definition:

The term “genetically modified organism” (GMO) was originally used by the molecular biology scientific community to denote a living organism that had been genetically modified by inserting a gene from an unrelated species. Incorporation of genes from an unrelated species does not occur in nature through sexual reproduction and thus, various types of sophisticated technologies are used to accomplish this. These types of plants are generally called “transgenics”. Transgenic technology has been used in over 40 species of plants including corn, cotton, tomatoes, potatoes, soybeans, tobacco, rice, cranberries, papayas, raspberries, chrysanthemums, gladioli, petunias, poplars, spruce, and walnuts. In crop plants, the technology has generally been used to incorporate insect resistance or herbicide tolerance. More recently, transgenic rice strains having high vitamin A or high iron content have been developed. In the future, transgenic plants may be used as “bioreactors” to produce large quantities of inexpensive pharmaceuticals, polymers, industrial enzymes, as well as modified oils, starches, and proteins. via ARS : What are GMO’S?.

So basically, a GMO (genetically modified organism) is a plant, crop, food or something related to those things that was created with biotechnology. There are several kinds of GMOs, all of them involve taking a gene from one species and putting it into another unrelated species. In reading the USDA definition I have to admit that I wasn’t aware that so many of the flowers were GMO, nor was I aware of some of the trees and berries, but I think that’s because most people focus on GMOs as the foods that are produced with crops like corn and soybeans.

I hope this post makes sense, but if not, I trust that you will ask questions til I get it right.

My View on GMOs

I have worked directly with people who invented some of the biotech traits on the market. Knowing their scientific genius (and I don’t use that word lightly at all) and the kind of people they are (truly value family, farm, health, etc and having seen the extensive amount of testing involved in the products — we have all sorts of scientists engaged on health, environment, etc. It is amazing to me how much we invest on this kind of testing and I love showcasing it for others. All of that said, I don’t necessarily think that GMOs are a silver bullet for agriculture, however, I think a lot of people who haven’t taken time to really learn about them or even worse, some who have an agenda against them are prolific in publishing misinformation on the internet. So if I don’t speak my mind, from a point of some first-hand knowledge, how can I expect others to?

I think we need to continue improving crops through traditional breeding, through molecular breeding, through agronomic practices like crop rotation and irrigation management, etc. Biotech is a tool to be used and it should be judged as to whether it brings value for individual farms and for the general public. Science should have a role in the conversation, but people have every right to make emotional choices too. I would like to think having the facts help, but maybe others don’t. To me, there are a lot of benefits that GMOs can offer that people don’t think about. I mean environmentalists like Mark Lynas have done some research and found they were fed a load of BS by some others, my foodie friends Grant and Ellen have also been willing to do the research and found they had been given only one side and that it was warped in quite a few places and Fourat, who wrote Random Rationality has changed his position and recently published interviews with an ag scientist, a farmer and a biotech developer.

How different are GMOs? 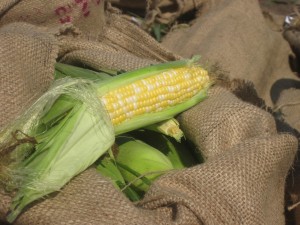 Although photos on the internet would make you think GMOs have skulls and crossbones on them or needles in them, GMOs (at least the corn, soybeans, cotton & canola I know most about) for the vast majority of us, they look just like the conventional or organic version of the same crop. That’s because they are the same with the exception of a single protein or a few proteins which are teeny tiny pieces of the genetics of a plant. And those proteins are all natural, they just didn’t start in the plant biotech has found value in having them in.

On the other hand, there are some differences farmers may notice on some of these crops. Some are modified to resist pests, so farmers are less likely to see damage on them. And while we may not think about the absence of damage, consumers may see the difference with GMO sweet corn as worms are much less likely to mess up an ear of sweet corn, which means more kernels for us to nibble on.

What’s really cool to me is there are a number of different things that biotech is enabling us to change. For instance, talking about sweet corn, moths and worms are really drawn to the sweet crop (much like I am!). That means sweet corn farmers tend to do a number of things to control bugs including using organic, biological or conventional pesticides. The protein that is put into sweet corn is similar to one of the primary organic pesticides — its called bt (baccillus thuringenses).

If bt controls insects, is it harmful to me?

Last year I was doing a farm research tour in South Carolina when someone asked the researcher about whether he’d eat GMO sweet corn. He didn’t hesitate for a second as he said he would prefer to eat biotech sweet corn because he understood it so well. Knowing what he knew, he said the protein won’t impact his body and he’d prefer to feed it to kids and grandkids too because he realizes how safe it is and how much more friendly it can be for the environment.

Bt products are found to be safe for use in the environment and with mammals. The EPA (environmental protection agency) has not found any human health hazards related to using Bt. In fact the EPA has found Bt safe enough that it has exempted Bt from food residue tolerances, groundwater restrictions, endangered species labeling and special review requirements. Bt is often used near lakes, rivers and dwellings, and has no known effect on wildlife such as mammals, birds, and fish.

Humans exposed orally to 1000 mg/day for 3-5 days of Bt have showed no ill effects. Many tests have been conducted on test animals using different types of exposures. The results of the tests showed that the use of Bt causes few if any negative effects. Bt does not persist in the digestive systems of mammals. via Bt Safety.

Are all GMOs the same? 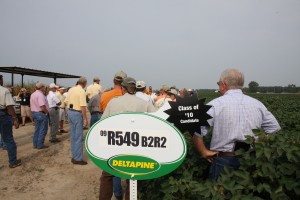 No. This is one reason why I think some of the discussions are so hard to follow at times. There are biotech traits that do a variety of things for the plants and for the farmers planting them. Let me run through some of them I’m familiar with starting with the one that gets the vast majority of the online buzz:

Here is an example that probably everyone can understand – the gene that gets inserted into Roundup Ready plants is a petunia gene, because they are naturally resistant to Roundup. So, they essentially are taking a desirable element from an innocuous plant (our lovely petunia plant) and insert that ‘piece’ into crops. It is like adding walnuts into brownies – brownies are great by itself, but are fabulous with the walnuts or pecans!

There are also traits that offer Abiotic Stress Tolerance (a good example is this year farmers in the western Plains will be planting some corn that is called DroughtGard which helps the plant function better in times of low water availability), Disease Resistance (this one is really awesome knowing how bad diseases can get. I haven’t seen the papayas or squash but I can’t help but think of things like the Irish potato famine NOT happening if we learn enough here) and Modified Product Quality (improved oils is one area that is working but there is also an Arctic Apple being developed that won’t brown as easily once cut which sounds like it has awesome potential).

There are several really good videos with moms asking biotech experts questions. This is a good GMO 101 but there are several other good videos on biotech at Best Food Facts. and you can always get in touch with some of the scientists who “talk nerdy to me” and others through social media.

What else would you like to know about GMOs?

I took a stab at this in the dark but I can’t help but wonder if I answered at least the GMO part of Sydney’s question but I really don’t know whether I hit the right topics. So feel free to put your questions here in the comments and I will answer and or friends will chime in.

Tuesday will be brought to you by the letter “H” so what do you think the word of the day should be?

0 shares
« F is for Farmer! — An A to Z Challenge in Agriculture
What should you know about hay? An A to Z Entry »