Doing a series on things I am thankful for means looking at a really wide variety of things… not all are deep thoughts. But some would argue being thankful for bacon would be a deep-seated, heavily emotional topic.

Last Monday, I had a heckuva day ahead of me and I decided to start it off with a bang. How would I do that? I made myself a quick breakfast that relied heavily on bacon to go! And I was so pumped about it, I took a photo & worked up a little text for it. It was pretty popular on Facebook. Just look at this and tell me you won’t want bacon tomorrow morning (if not before!) 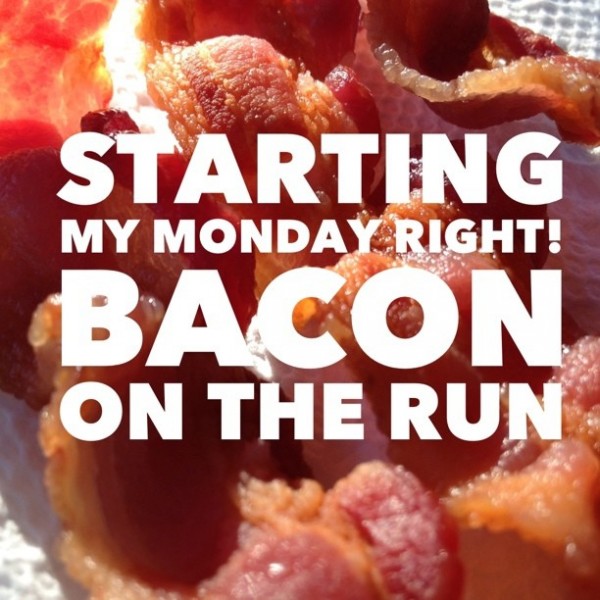 Bacon is definitely on a high these days. Seems like everyone talks about it. Rumor has it that bacon could be the meat that vegans or vegetarians are most likely to want. And this website has t-shirts that say “Vegetarians….. except for bacon” which I think are a riot! 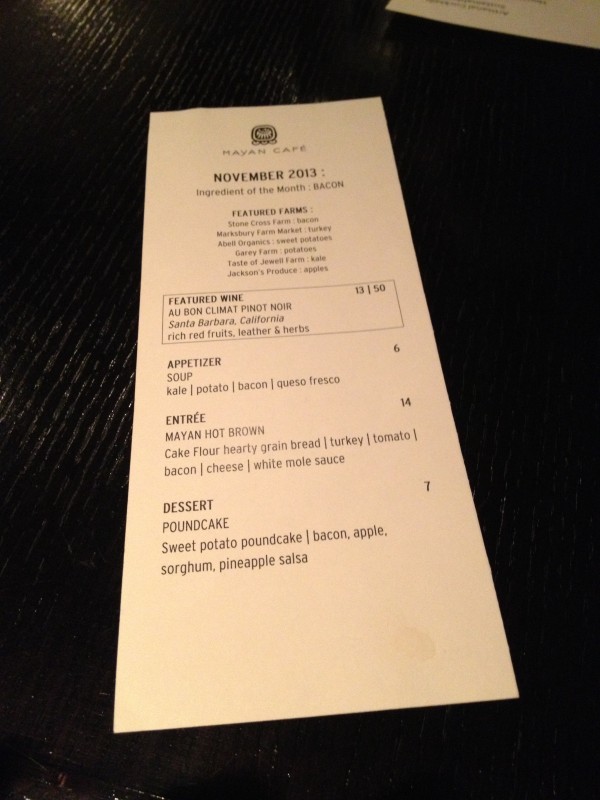 Last night at dinner, my friend Mark and I went to a Mayan restaurant — Mayan Cafe in Louisville, KY. It was in a trendy part of town with the kinds of menus that boast a special seasonal menu as well as the local farms they have sourced products from.

I had to read the two menus (the November one as well as one with a little longer life) closely to decide which way to go, but seeing the featured ingredient of the month was bacon, I figured something with bacon would have to make its way to our table!

It will probably surprise some of you, but the choice for me was that I chose to go with something from the main menu for the entree but decided to order a bacony dessert! Yes, sweet potato pound cake with bacon, apple, sorghum and pineapple salsa! Just check it out! 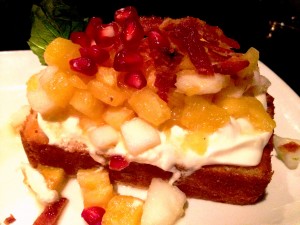 With such a clear love of bacon, it probably won’t surprise some of you I have written about it before. 🙂 My post “If You Love Bacon, Have I Got Ideas for You! Blogging & Shopping!” includes some great blogs and gift ideas!

0 shares
« Old Friends Give me an Incredible Sense of Gratitude
30 Days of Thanks: Thankful for A Nephew Who Totally Rocks »