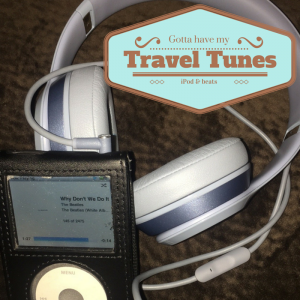 This week as I was settling into a Southwest flight to Washington D.C., I got on early enough to nab the aisle seat in an exit row. With as much as I travel, I have a routine that I go through when I get on a flight and I started going through that. I was feeling good as I clipped my trusty water bottle to the seat pocket and dug out my iPad, my old school iPod (I still can’t believe they discontinued them… I love having my entire music catalog with me) and my Beats.

Soon the flight crew said we were going to have quite a few empty seats so if people wanted to put some of the smaller bags overhead, there was plenty of room. I pushed my backpack under the seat in front of me and smiled as I realized how much legroom I had and how quickly I could get to the rest of the stuff I may want — chapstick, a pashmina wrap, etc.

It wasn’t until we were getting ready to push back that I realized the lady next to me was a bit distracted or nervous. I nodded, said hello and offered her some gum as the flight attendant came over to get confirmation we would help in the event of emergency. We all agreed and the lady next to me was asked to tuck her bag under the seat since she had it sitting in the middle seat.

My fellow passenger definitely lacked the routine I had. She seemed to move that bag a dozen times between the floor and seat. She had gotten things in and out of the bad, fidgeted, etc. I was trying to ignore it until I saw this. Yes, I took a photo of it and yes, thanks to the wonderful in-flight wifi, I shared it on Instagram.

This is next to me on my flight. Having #flashbacks! Have you ever carried one of these & if so when was the last time you remember? #blownaway #discmaninthewild #travel

It was truly mindblowing for me. A Sony Discman. It left me speechless. I didn’t know they still existed. And I have to say, I can’t see the romance attached to them the way I can with vinyl. I mean a CD is just another form of digital recording.

In hindsight, I have so many questions. I am now wondering how I missed her fiddling with a CD or two. I’m guessing the flight was short enough she could simply listen to one. I have to wonder if she was carrying a small booklet of CDs the way I did more than a decade ago.

I remember carrying a discman clearly…. I had a bright yellow one for a while. When traveling I also carried a cassette converter so I could play the CDs in the rental car. (That was before audiojacks were common afterall.)  In the book would be a variety of CDs, slid into place like pictures in photo albums. A bunch of those would be mixed CDs, just like the kind Jack Nicholson’s character has prepared for the long drive in “As Good As it Gets.”

I think about how heavy that book would get. How I was always trying to balance a disc or two without getting them covered in fingerprints. How the discman never fit in a pocket so it was always in my hand or purse.

And then I think about how I have this old iPod (one in a series that kept being upgraded to get more room), how it holds most of my music library of more than 20,000 songs. I can listen to whatever I want on it. And yes, I have my music paired to the cloud so I can get the majority of it, song-by-song from my phone as long as I can get online.

That flight from St. Louis to D.C. sure seemed like I had traveled a lot further than my seatmate but that may be because I’ve always had such an incredible love of music or I simply travel so frequently.

0 shares
« My First Visit to The Martin Luther King, Jr. Memorial in DC
Top 6 Tips for Flying on Snow Days »