I’ve talked about how I came to be on Twitter before but what happened after I got on…. not sure I could have anticipated that. Within a few months of being on Twitter, the tweeting agricultural community was clearly as a great source of information for me. I can still remember when I broke the quiet of Twitter that was broken only by an occasional chirp from TweetDeck.

So how did Twitter gain additional sounds? Easy. I read a tweet that made no sense to me just based on what I thought was commonsense. But since it was about cattle, and I really knew nothing about cattle, I really had no idea whether commonsense was the right thing to fall back on. That tweet, which I later found common sense and critical thinking proved accurate in determining I was reading some real BS. I got that confirmed by going back and forth by direct message with one of the farmers I had been trading tweets now and then. But since our experience levels (& the accompanying vocabulary) were so dramatically different, we finally decided a quick phone call would probably put my questions to rest faster than the never ending direct messages. That farmer, who’s avatar was a cow for the first year he was on Twitter, was Mike Haley or as I knew him at the time @FarmerHaley.

Over the next several months, I learned a decent amount about livestock. That was the summer that Food Inc. came out, and since I knew some of the things said about agriculture didn’t resemble my experience with crop farmers so I had a lot of questions about livestock and meat…. Farmer Haley helped me understand his farm & volunteered info about a lot of other farms in his area. I even spent the better part of a day mooing in honor of his birthday as he helped draw attention to the problems dairy farmers were having! And it wasn’t long til I was booking vacation plans to see what this farmer was up to at a big cattle show — once I actually got to NAILE, I really learned a lot!!! 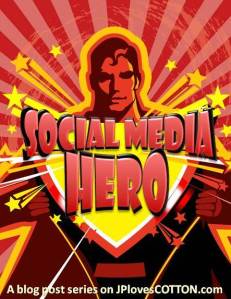 one of my social media heroes in large part because as we were getting to know Twitter, we were also extending it into the world of phones, email and visits in real life. He also helped me go well beyond the basics as we tend to have creativity sessions where we start wondering “what if….” and the wildest things happen on social media. And I’d be remiss if I didn’t mention that Mike’s a good enough friend he knows exactly what buttons to push…. and, like a brother, only pushes them when I can take it.

Twitter efforts to raise the awareness in farm-related topics, Facebook pages and groups to reach people, and major outreach projects like creating the AgChat Foundation and the FarmerBloggers site all have been among his accomplishments. And although you never know exactly what sort of project is to come next, you can rest assured Mike’s got another great social media idea just waiting to amaze the rest of us.

If you aren’t amazed easily, you may doubt me. But for most of my family and friends, the fact that Mike & his wife Pam actually sell semen and embryos online. I guess I should specify that they are from the family’s cow-calf operation where they have been improving the genetics of the livestock in their herd.But I kind of love throwing that out without the cattle qualifier first. 🙂 You can find Mike & Pam Haley (@SimmyFarmGirl), and their incredible cattle, on several places online starting with:

Who helped break that weird social media sphere into conversations that were longer for you? Have you met social media friends in real life? If so, did they live up to your expectations or even exceed them like the Haleys did for me?