With a star on the Delmar Loop’s walk of fame and a role in one of my favorite movies (The Big Lebowski), John Goodman has earned a prominent spot on my St. Louis A to Z. 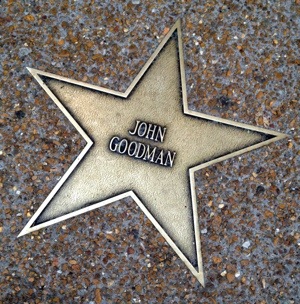 I think John Goodman is probably one of those American actors that lots of people would like to hang out with, maybe even go bowling and grab a few beers with. A description like that kind of tips the hat to the fact that Goodman is probably from a flyover state. And knowing he’s a fan of the Cardinals, you know catching a ballgame with him would be a blast.

He grew up in a suburb of the city called Affton, which is down near Grant’s Farm, a working class community that no doubt has served him well in terms of being fairly level-headed compared to some of the actors he has been alongside! I love the fact he says he worked at Sandy’s Chicken Coop til he discovered the miracle of the car wash. That sounds so 1970s doesn’t it?

Joplin – Scott Joplin that is!

At the turn of the century — 1900 that is — ragtime composer Scott Joplin was from Texas originally but moved to St. Louis in 1901 and his home is now a state historic park. 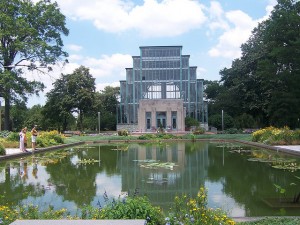 One of the striking views in Forest Park is the Jewel Box. A sort of art deco greenhouse with louvered glass, it gets filled with beautiful flowers and is a great place for weddings and parties.

The Arch is the dominant piece of the Jefferson National Expansion Memorial, part of the National Park Service. It is where we take time to acknowledge how important it was for the westward expansion of the United States. I personally love the Guggenheim documentary they show at the base of the Arch.  But it is important to remember that the park covers several acres perfect for soaking up some sun or having a picnic, it is also inclusive of the courthouse where Dred Scott pursued justice. All of those things lead to it being one of the top 3 family adventures in St. Louis. And just look at the view of it from the Hilton!

This is one of Danielle’s suggestions that I had to do a little researching to find out about. And now I realize I’ve actually been in the area and seen a bit of the river from Jefferson Barracks but didn’t take time to figure out what all was around me. Will have to go back as this is the place where service men & women are honored for their service in the 1800s and has continued to have a place with the military. In fact, it is still home to the National Guard and the Veterans Administration hospital, according to the Jefferson Barracks website.

You can see the rest of the  St. Louis A to Z or check out last year’s A to Z of Agriculture — J was for juggling cause so many farmers do so many roles! And you can browse a list of almost 2,000 bloggers doing their own A to Z Challenge.