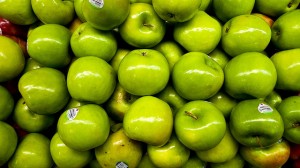 few years ago (2010 to be  exact) the great butter and lard debate launched a fun series of food polls for my blog over the summer. Each weekend I would do a food poll. The poll could be on almost any kind of food — we talked ice cream, favorite Chicago foods, celebrating by eating out or eating in and favorite state fair foods (which I enjoyed several of at the Iowa State Fair!)

I have thought about reviving my food polls a few times before, mainly because I thought it was so fun for me and I found out a lot of things people thought about food. But I recently had something propel me to actually do it rather than think about it. I had a great snack and celebrated it by tweeting! And I love that I had friends who immediately tweeted back.

I just had a really yummy apple for my snack…. dang it was good!

It was an awesome apple…. a Granny Smith apple actually. It was really crisp. It was a bit sweet and a bit tart. But since I had so many folks get involved in sharing the love of apples, I thought I’d find out what the in apple is! This poll is for eating the apple fresh — I realize cooked apples may be different!

Now that I have you thinking about apples, how do you like to eat them? What’s you favorite apple food? Feel free to add your favorite way in the poll and if you have a recipe that you think will wow people, put that in the comments!

Who grows our apples?

There are apple farmers in a lot of places. In fact, my mom has some cousins in Tennessee who have an apple orchard. They are kind of distant cousins so I’ve only visited once as a kid but we grew up having an apple tree in our backyard and I’ve seen them in lots of states as you drive around.

One of my agnerd friends, Jeff VanderWerff in the Grand Rapids, Michigan area has a family farm that grows apples for commercial production. He’s done a series of videos that are on YouTube that let you see how they plant a new apple orchard, how they deal with pests, and more. I thought this video about understanding whether frost hurt blooms is a good one cause this spring hasn’t gone too smoothly!

Some of you may already remember I’ve talked about my friend Ben LaCross of northern Michigan being a cherry farmer, well his family has apple orchards too! He did a great Q&A with the Supermarket Guru about his family farm and mentions that they sell through farmstands locally as well as providing things wholesale. I love this video Ben did showing how they handled harvest in 2010 and talking about what’s important in that process.

What other foods do you think should make the series?

I already have some ideas on food polls but you know I’m always open for suggestions! What kinds of food questions do you think I should be asking? Let me know by putting it in the comments! Also give me your other thoughts on apples!