Sunday I was in Virginia Beach, VA for work and when I posted a photo of my beloved she-crab soup, my friend Lisa posted she was enjoying some a few hours south in Charleston. As I flew home Monday, snowflakes began flying and weather forecasts began sounding alarms. Lisa was continuing her tour going south to Savannah, Georgia for a bit before coming back to Charleston.

Tonight as I checked Facebook, I saw she had posted new photos of her drive up I-95. And she also posted an update on the type of day she had.

Wow, an interesting turn of events. You may have seen that the Southeast is experiencing a major winter storm. I was watching the weather very carefully and it seemed that if I were to hug the coast I would avoid the ice storm. So this morning I left Savannah headed to Middleton Place just outside of Charleston. 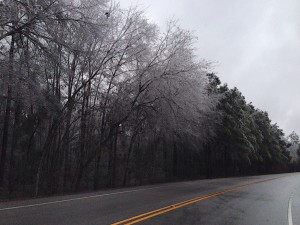 I knew that all the bridges into Charleston were closed until further notice due to the possibility of icing, but since I wasn’t going into the city itself I thought I would be okay.

It had rained overnight in Savannah, but no ice. And when I left around 1130 it was overcast and around 40°. I made the several miles to the interstate with no problem, and was heading north on I-95. About halfway through my trip I noticed that all the trees seem to be coated in ice. 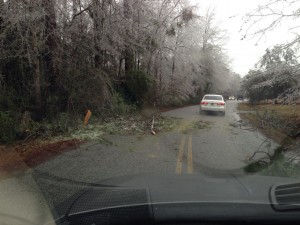 The further north I drove the heavier the ice coating appeared. The roads were fine, just wet and the temperature varied between 33 and 34°. About an hour from my destination I started noticing the tree branches were falling and the trees were heavily bowed. I saw some branches fall and one very tall pine tree fell across the interstate about a quarter-mile ahead of me. I went on the shoulder to avoid it. There were crews on the road taking care of other trees that had fallen. 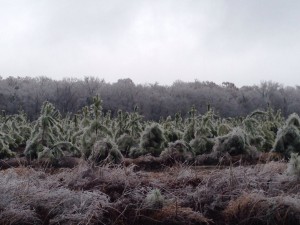 I got off the interstate for the last half-hour of my trip. I stopped at a gas station for a drink and was told they were closed because they had no power. In fact that was the last semblance of power I would see until 745 tonight. As I drove the last 30 miles or so I saw more and more tree branches fall. Many times I had to dodge around them as they were lying across the road. I was beginning to think I should’ve stayed in Savannah! I’ve heard of trees falling on cars and crushing the inhabitants and that was certainly on my mind. 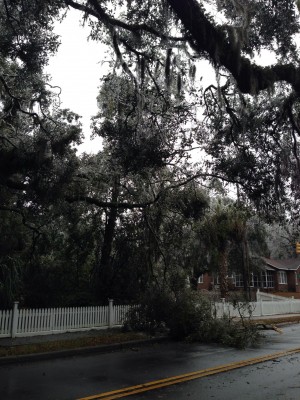 At one little town I had to do a detour because powerlines had fallen across the highway and the road was closed.

About 10 miles from my destination there were more and more downed branches and I saw power lines down, road crews out, and branches hanging off the remaining power lines.

Needless to say when I arrived at my hotel there was no power. I went to the lodge area and even though the restaurant was it open they were nice enough to give me a cold chicken sandwich which tasted very good.

I went to my room and built a fire. Yes, this was a bonus that all rooms have fireplaces. 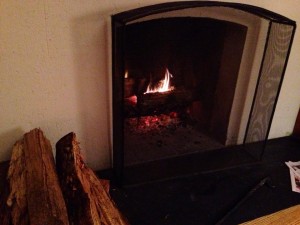 Around five I went back to the lodge for the Wine and cheese reception.
What had started out as a pioneer adventure was now seeming rather less fun. The manager took extra wood, blankets and candles to my room for me.

I came back to the room and brought in even more wood prepared for a long, dark and cold night. I got my fire built-up, extra blankets on the bed crawled in and then Eureka! The lights came on.

So now I’m very excited at the possibility that everything is going to be okay. Tomorrow I resume my adventures.

I’ve posted some pictures of the scenes along the way. This has all given me a new appreciation for our forbearers who had no electricity, and the people who have been affected by these terrible winter storms.

Glad to know Lisa made it safely to the hotel and glad to hear my sister and niece made it home safely from work in Charlotte — they were in that horrible traffic jam for hours. It reminds me that people need to be prepared for extreme weather. To me we are getting far too much practice with this stuff this winter. But with pitchers reporting in for training, there is hope in sight!

0 shares
« If Monsanto is evil, what’s that say about me? About dialogue?
Did you know Old McDonald was a really bad speller? »