I’m not sure how or when it happened, but 2016 got a bad rep. We had some startling moments for sure and lots of things we didn’t expect happened. Some were personal and others were in the public eye. It seems the public drags on happiness can be overwhelming. For me, I have to admit the deaths of celebrities I grew up with left a mark — seeing Prince’s Purple Rain tour was the first concert I went to with friends. So I think a lot of us lost track of all the good things that happened in 2016. 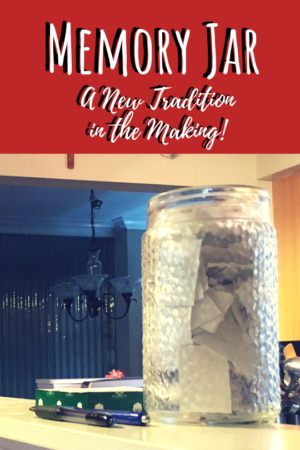 But at the start of 2016, I started a new tradition. Throughout the year, I would put notes of joy in a jar thanks to my cousin Jon-Eric suggesting it and seeing my friend Cheryl’s blog post about her memory jar.

I have to say that when I started it on January 1, I wasn’t too sure I’d keep it up. I decided to put the jar in a really obvious place in my house so I’d see it regularly. Alongside the jar, I placed a note pad and a pen to encourage me to write things down regularly. As I sit here on New Year’s Eve, I can look through various points throughout the year that brought me great joy, meant new experiences or that I am proud of… the memories I wanted to stick with me for 2016.

Given that 2016 had so many challenges broadcast into my home so often, I’ve decided it will be a new tradition for me. It is an easy way to take charge of what stands out from each year, a way to capture happy moments to seal them as happy memories.

Some of the things I captured were really small moments while others were major milestones, some deeply personal and others were shared. It was done just for me and I have loved looking back through the notes today.

There were moments with family and friends marking birthdays, celebrating engagements and weddings, great trips, accomplishments at work, etc but I also made notes of some of the casual meals with friends I had and things people said that I wanted to remember.

It was really a good way to celebrate the year that I want to remember. So, I’m taking note and getting ready for a return in 2017! I have some ideas for making this better though so I thought I’d share.

Have you ever done this or something else to help you capture the good? Ideas that I should consider to make the 2017 capture better?

A Few Posts from 2016 covering Topics in my Memory Jar

5 shares
« Finding Awesome Amidst a Crazy Travel Day
What do farmers do in the winter? »

This blog is part of the communications efforts by JPlovesCOTTON LLC.
5 shares