Urban agriculture. I can’t imagine many people used that phrase 20 years ago but it is certainly a phrase that is growing in prominence. And I think its awesome! The more ways we connect ourselves to the production of food — both in the city and the countryside — the more we will appreciate the effort it takes to produce it, the relationship between our food and the environment and I think that simply by prompting us to think more about these things, we think more about eating better. We become more mindful of our food. 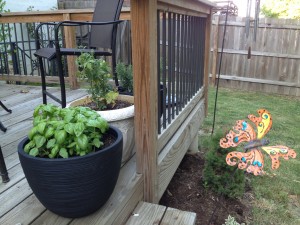 Personal gardens have long been a part of the urban landscape. My parents and grandmom liked to garden, my sister has occasionally had a square-foot garden, and I have had container gardens for years and recently started raised bed gardening.  I’m not sure if those things fit the dictionary definition of urban agriculture, but they are all part of my definition of urban ag since they fill a great role in providing people in cities with a touchstone for the farm, soils and fresh food.

The gardens my parents and grandmom did for years were some of the earliest community gardens in Memphis. We would go to the garden plots laid out at Shelby Farms in the 1970s regularly to water plants, gather fresh vegetables, and more.

It is great knowing that the gardens continue (at least they are still listed on the Shelby Farms site) and that in recent years they have been thriving! This article from the Memphis Flyer in 2009 said that interest is gardening had been growing significantly:

“One morning, I saw 30 people,” Griffin says. “The economy probably plays a part. Plus, it seems cool this year to grow your own vegetables. Everywhere you look people are talking about it.”

Early last month, with a phalanx of elementary school children at her feet, first lady Michelle Obama started the first victory garden at the White House since Eleanor Roosevelt lived there. But the national attention to vegetable gardening was already under way.

Seed companies are flourishing, with the nation’s largest — W. Atlee Burpee — reporting a 25 to 30 percent spike in seed sales this year. The National Gardening Association says 19 percent more Americans plan to grow their own fruits and vegetables this year. Even the University of Memphis is getting in on the act, starting a pilot project to grow organic vegetables on its main campus.

The reasons are as varied as the seeds people plan to plant: the taste of fresh produce, the exercise, the fresh air, and the joy of seeing something grow.

In the last few years, there have been increases in other types of urban agriculture including urban farms. One of the urban farms I got to see spring to life is Urban Farms in Midtown Memphis. And more recently I’ve watched as the food roof project by Urban Harvest STL for downtown St. Louis has sought funding.

The folks at Urban Harvest STL have some great numbers that help you understand the current look of the city — they point out there are “13,000 downtown residents, 88,000 downtown employees, 1 community garden, 30 urban farmers, 920 lbs of food grown in 2012, 182 lbs donated to charity and 860 volunteer hours.” I have to say, I look forward to seeing the numbers grow.

If you are interested in helping grow urban agriculture, what are you waiting for? There are projects popping up all over you can support or  you could start one. The EPA has a list of steps to help people  create a community garden or expand urban agriculture in their area as well as a page filled with urban agriculture success stories. The steps are:

See the other posts in this series by clicking on the logo at right and reviewing the letters, or by browsing the A to Z ag tag archives. I’ve gotten some great suggestions for other letters including offers of winery tours for me to talk wine or viticulture! These folks are talking my language!

0 shares
« T is for Tillage — Understanding “When tillage begins, other arts will follow.”
V is for Viticulture — Cultivating Grapes for Wine Making »