I have done a few different blogging and social media challenges in the past couple of years, but have to say the A to Z Challenge may have been the toughest! And even though someone has suggested that I should start again with AA and BB, I’m taking a break from the series — at least for now! Please note that I think it could have been done more easily. Experience teaches a lot!

Let me explain some of what I learned and worked through. There were things I did well and things I can improve on assuming I do it next year (and that is a really high rating option). But first, you can see that I get the badge for completion, just like I’m in the scouts!

I guess the first thing I did right in the challenge was I thought it through BEFORE I signed up. I think some people get the urge to sign up without thinking through how likely it is that they will post all 26 posts in a month or looking for ways to make that work. Quite a few people signed up and didn’t do it or gave out midway. Some (like me) ended up going into May before they finished.

I read through some of the tips the team at the A to Z challenge offered they generally seemed to offer you various ways to think it through… ideas to help you complete the blogging challenge successfully. One of the ones that I think helped me most was picking a theme to my A to Z because even having a theme like agriculture sometimes I felt there were so many options for a letter. So to just say I’m doing an A to Z that suits my blog would have been overwhelming. Next year I may even make it a more narrow focus.

I really wanted to keep the quality of my blog posts up. I knew I could write short posts but once I got started, I really found choosing concepts I wanted more people to really understand made the most sense for me. That made me challenge myself more than a necessarily want to. I really researched posts…. provided good solid links. I’m ok with the fact my push for quality and more extensive  content made it hard to get all the posts done on time.

One of the things I felt I was at successful at was engaging other people to help me come up with ideas. I had two people give me complete alphabet suggestions — thanks Thomas & Kim — and wrote them in the comments on my initial post! I regularly asked people for ideas for upcoming letters and there thoughts on what I may have missed in a topic. And I had a lot of photos to pull from!

One of the tips I should have paid more attention to and thought through more was getting ahead of the game. I wrote a few posts ahead, but once I got pushed, I failed to get more in the can. I let my cushion slide away and then next thing I knew, I was falling behind — hence the May second completion of the challenge instead of finishing as April did. For next year, assuming I do it again, I think I’d be best off if I wrote one or two posts for each week ahead instead of just starting from A in working ahead.

A Challenge Commenting on Some Blogs

One of the pieces of the challenge that I really enjoyed is how you start from where you are on the list and visit other blogs doing the challenge. I got through close to 100 blogs and found some really cool ones. The biggest drawback is that some of them don’t understand how important it is to set up a good commenting system.

Some of them had too many hoops to jump through, especially when I was reading them on my iPad. It’s important for bloggers to find ways to encourage comments. But some of the blogging systems try to make it hard. Things I think bloggers should avoid include:

There were several blogs I visited that even after writing a thorough comment and trying several different ways to connect, I still couldn’t. It was a real bummer as I really enjoy interracting with other bloggers. 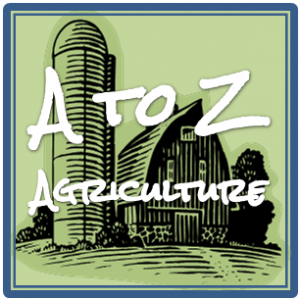 My A to Z on Ag Posts

I kept a running list of my posts on my A is for Agriculture start page. I like how that gave me a central point of contact throughout the challenge even though I knew I wanted to do a roundup post at the end of the challenge too. So here are the letters & some of the photos used during my challenge.

There are some words I really wish I could have done so I think I’ll do some of them in the next month, just not under the pressure of a specific challenge. By limiting everyone’s suggestions to the top three words I missed I will include some of the suggestions with my A to Z in Agriculture adds. I’d love to have help thinking about the most important words… and I realize that one letter or another may need more than one more post.

If you were to tell me three words that I should have included in my series but missed, what would they be?

0 shares
« Z is for Zoonoses — Zoonoses Isn’t Something Farmers Can Laugh About
Left Wordless By Visiting a Flower Farm — Lots of Irises & Peonies! »